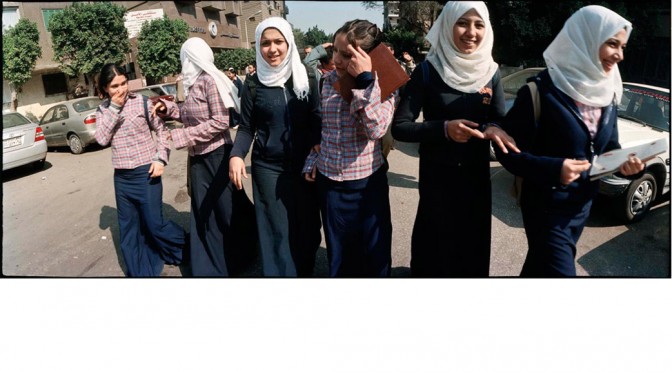 „The artist overcame the obstacles of fear – not his – and Egyptians‘ automatic temptation to self-censor when he was finally able to exhibit his photographic tableaux in the most unconventional gallery: the rooftop of his building.“

“ I went to Cairo on a three-month artist residency grant. I soon met a local gallerist, who expressed interest in my work. But he then called me to say that he had could not sleep at night and that he would lose the gallery if he showed my work. I first had a picture of the Birqash camel market printed on canvas sheet. When I came back with the other pictures, the woman in the shop asked me what the subject matter was. This is Cairo, I said, don’t you recognize your city ? She had her boss come in and look, and he refused to work on the pictures, telling me that, as press material, it must be subjected to official censorship. Naturally, the refusal, the self-censorship, is the result of the severe State censorship. But I can’t help seing in it a kind of hypocrisy as well. My images show nothing more than the city’s daily life, what each and everyone on its inhabitants see with their own eyes everyday. I finally found another printer, and decided to keep silent about my project, which was to show my pictures for a day on a rooftop in the heart of the city. In downtown Cairo, the poorest of the poor, many of them economic refugees from Southern Egypt, live in shacks on the rooftops. My upstairs “neighbours” immediately agreed to share their rooftop. About a hundred people showed up on the day. The Daily Star newspaper published a story about the exhibition a week later.”

The reporters of the Swiss Television TSR covered the rooftop exhibit of Michael von Graffenried in Downtown Cairo on March 23, 2007